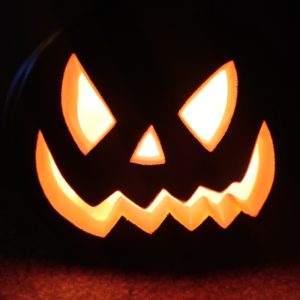 For our Halloween episode, we discuss how flies are used in forensic science, black widows eating their siblings, cicadas as food and a story about bot flies. Be sure to check it out!

Nothing says Halloween quite like black widows. They’re creepy looking, they spin webs, their poisonous, and cannibalistic.

That in itself creates tension on the home front. We’re talking a whole different dynamic at the dinner table. It’s not, “Mom! Johnny stole my hamburger!”, it’s more of “Johnny sunk his teeth in my abdomen!”

Apparently, a lot of the mother’s time is spent trying to synchronize her offspring’s development. Otherwise, some of them will develop faster than the others and she’ll go from a couple hundred hatchlings, down to a few really big ones.

I’m going to play a clip for you. This is Science Update with host Bob Hirshon speaking with CHAD JOHNSON an Assoc Professor at Arizona State University.

They made reference to females, sometimes eating potential mates. Here’s the deal with that. They say, if the male is fit, he’ll have no problem getting away If the female comes after him. It’s usually the loser guys that get munched on. They might do a lame little dance, “Hey sexy! How about some of this?”

She’s not really into him, but you have to give her credit for being opportunistic. Maybe she’s a little hungry, so she’s like, “Hey there cute little fella! Come over so I can whisper a little something in your ear!”. Then, like the typical lovable gullible guy, he ends up as dinner.

Not too much different from the nice guy at the club, buying the pretty girl drinks. Or the guy at the grocery store, asking a girl out to the Cheesecake Factory. She’s like, “Dinner, oh sure! I’d LOVE to have dinner with you”. $150 bucks later, He’s getting a peck on the cheek.

To our younger male listeners, never take her out to dinner, or a concert or something that costs a lot of money. It’s not about the money; you just don’t want it to appear that you’re trying to buy her attention.

There are a few whys forensic experts can predict time of death, like temperature, body stiffness. But when you get to about the 4 day mark, it’s time to call in Forensic entomologists.

I never understood this, because I just assumed flies were flies. If it stunk, and was organic, it was fair game.

What I didn’t know was that different flies are attracted to different stages of the decomposition process.

Blow flies are attracted to freshly dead meat. They’ll lay their eggs in or around body openings like the nostrils, mouth, eyes, bullet holes… Lord knows what else.

Then, when things start to ferment, you start getting flesh flies and the little filth flies, and some beetles start showing up.

So the trick is, to find the oldest maggot, and find out what kind of fly is it. This is because when you know the life cycle, you can predict when the eggs were laid.

They say they can accurately predict the time of death within a day using this method.

Here are some things that can screw up the estimation. If the body was in cold weather, or if it was wrapped up in plastic, or in a air-tight vehicle. Those situations can throw things off by up to 17 days.

Cocaine can speed up fly development, so it can mess up the prediction as well. Gives new meaning to blow fly, right?

Here’s the nastiest scenario, what about when the flies make it to the body before the person dies?

Gimlet Media has a wonderful podcast called Science VS. In this clip, host  Wendy Zukerman speaks with forensic entomologist and Assoc. Prof. at Sam Houston State University – Sibyl Bucheli,  Sibyl tells us about an experiment where they monitored which and when arthropods would show up on a particular body.

WW2 – Online Reviews and the Evolution of Selling